🚨ALPHA ALERT: Just a reminder this is the alpha release of Scully so it's a WIP that is very open to any feedback & help for any bugs you find or features you'd love. The HeroDev team is shooting for a beta release at the end of January 2020. Also, as of this publication Scully only supports v9 of Angular (v8 support on the way). Here's a post to guide you through updating to v9.

We're starting with a simple Angular app (here is the repo) that has 3 views you can route to: About, Home and Users. Right now if we build and serve this application just using Angular it will ship with some handy but heavy files. Today we want to keep it light and fast so we'll use Scully to pre-render our app out into HTML files that don't even need JavaScript.

Scully can be installed and setup in our application using Angular schematics. The first step is to run the ng add command which will install dependencies needed, add a Scully config file (scully.config.js), and add some code to your existing files. When you run the command it will log out what it's doing (pictured below) but you can also check out the commit to our project repo to see what has changed.

Scully uses a built project to find the routes created and crawl the app to render everything into HTML files. So, before running Scully we'll need to build using ng build (we can also run build using the configuration flag ng build --prod).

Since we'll have to build and run Scully each time changes are made, I made a build script in the project's package.json file:

When we run ng build a compiled project is put into dist/<project name>. Now, when running npm run scully we'll find another folder in dist called static. Guess what's in there! That's right a bunch of static HTML files inside aptly named folders along with some JavaScript and asset files. 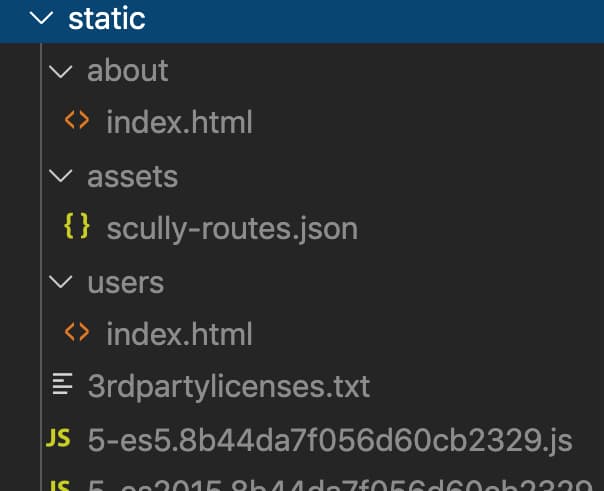 That's right, three commands and we have generated a stellar, static app 👩🏾‍💻✨.

Heading over to localhost:1668 we can see we have all of the pages loading perfectly. We can even use the browser tools to disable JavaScript, reload and see everything still works! You've heard it here first, the world did not burn if JavaScript was disabled 😉.

While we're in the dev tools we can also look at what was served and see that our app only sent out 30.1kb of data. To be clear 22.2KB of that was my unnecessary font, BUT look how sweet it is. So, without a bloated font we would have only transferred 7.9KB!

That is the core functionality of Scully, helping you quickly create a static site from your Angular app, just using the Angular you know so well. BUT WAIT...there's more!

As you may have heard, we are big fans of plugins here at Netlify and Scully has incorporated a plugin system to help add data to your apps. The app we're using has a user route that takes a user id in the path to render a specific user page (e.g. localhost:4200/user/1 will show user 1's information on the page). Here's the commit to show you how that is working.

We can't use Angular's dynamic routing to render this page in our static app, but there's a plugin for that! In the scully.config.js file add the plugin information to the /user/:userId route in the routes object.

we can head to localhost:1668/user/2 and see a view with user 2's information. If we take a peek into the dist/static folder we'll see a folder for each user that was in the JSON list. It's easy to see how this could be a great strategy for an e-commerce site that wants to generate a page for each product in a list.

If I've learned anything from writing code it's that typing is hard. We've been hitting these routes via the address bar but Scully has an easy way to get all the available routes: ScullyRoutesService. We'll use it to turn each route into a clickable link inside the footer.

First, we'll open the main app.component.ts file and import it up top then assign the ScullyRoutesService to scully.

Inside of the view file for the main page, app.component.html, we'll add an ngFor loop to go through all the routes and assign them to a routerLink. Inside the <a> tag we'll either display the route title if it has one or default to displaying the route. 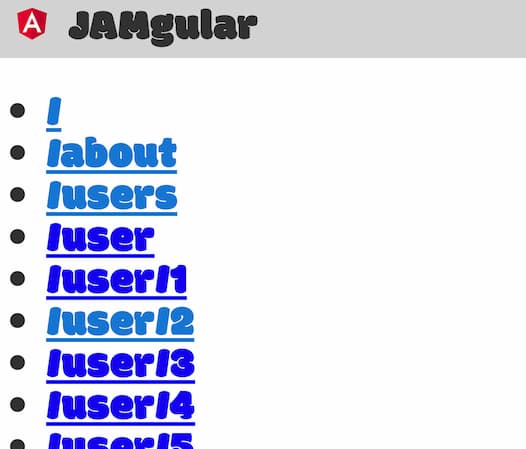 Isn't that special. You can check out this commit to see the changes we made.

Ok, ready to get meta? We're going to write a blog post IN this blog post 🙉. Such wild lives we lead! Back to it, Scully gives us the ability to create a blog by running an Angular generate schematic. 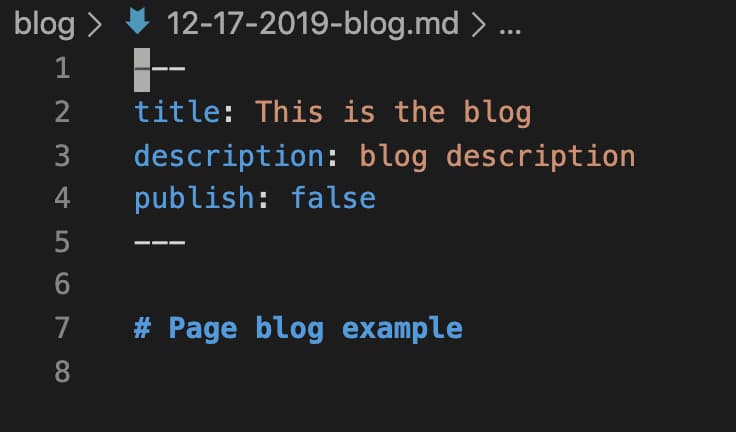 Once we have written about this momentous occasion we can just run the command npm run scully because Angular doesn't do anything with this markdown. This will actually only work for you when using Scully to make a static site. Angular doesn't currently understand Markdown, so if you tried to navigate to this site via Angular app routing you would get an error.

Finally, we can show the world what we've created. Netlify has a few super simple ways to get this content out there. In no particular order:

That's all there is to it!

Just in case your memory has gotten wiped after a close encounter of the third kind here's what you would need to do to pre-render and deploy your existing Angular site:

We've accomplished a lot today. I hereby declare that we deserve a nap. How can we nap though with all the possibilities of how we can create some pretty dynamic apps from this new static content and the JAMstack ecosystem?! Please share your apps with us at @Netlify, we're stoked to see what you create. Happy coding!