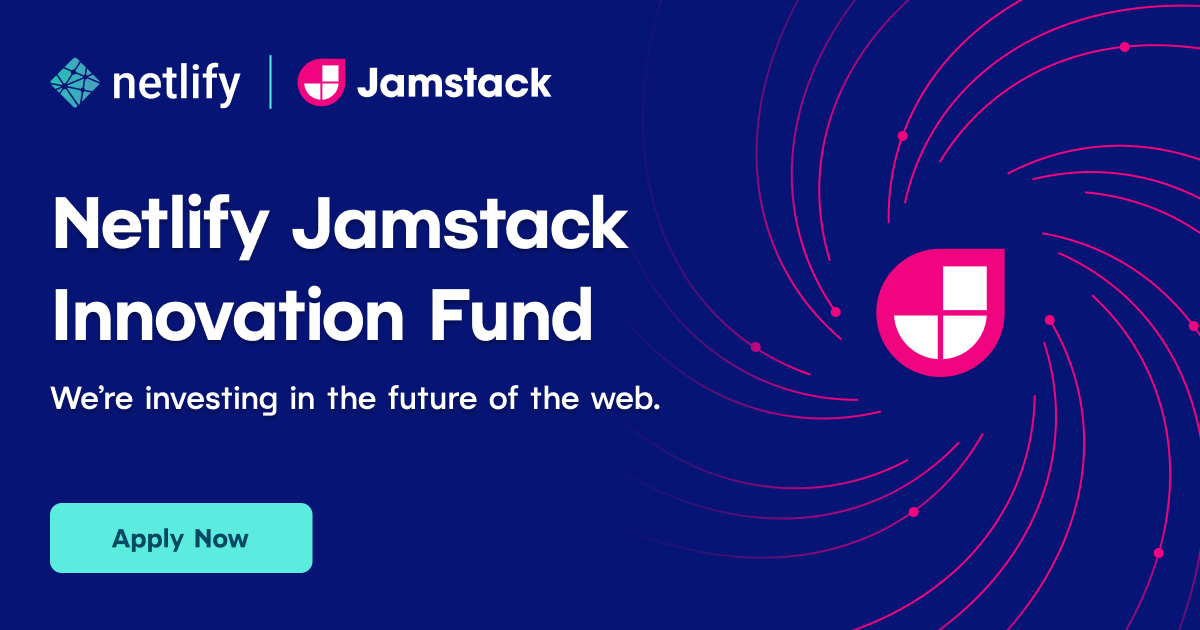 My co-founder Matt and I made a big bet when we founded Netlify: we bet on the web. At the time, mobile apps and walled gardens were threatening the open web, but we knew the web as a platform could be performant, secure and scalable enough to fight back. By embracing the API economy, the powerful browsers and the frontend tooling revolution, a new web was possible.

Our vision was as simple then as it is today: to build a better web.

We knew there were two important things needed to make it happen.

The first was a viable workflow, and a cohesive developer experience. Once monolithic applications no longer dictated build tools, programming languages, and server setups, developers were free to choose the right tools for each job. However, they would still need the glue code to tie everything together. That is why we built Netlify: to be a build, deployment and distribution platform that composes the frameworks, tools and services developers need to create these modern web applications.

The second was a strong ecosystem in order to advance the tools, APIs and services available to developers. If Netlify was going to be the backbone tying everything together, we’d be nothing if the ecosystem doesn’t mature alongside us.

As I write this it feels like forever ago I sat with Matt at Sugarlump Cafe in San Francisco coming up with the Jamstack nomenclature that would jumpstart this budding ecosystem. Today the category has truly gone mainstream.

The proof points are almost too many to count. I can’t think of a single CMS coming out over the last few years that isn’t headless. The same goes for headless e-commerce offerings which are exploding as well. Frameworks like Nuxt and Svelte are making it even easier for developers to build fantastic full-stack applications, Enterprise DXPs are becoming composable, and can you think of a new database that isn’t serverless first? The list goes on.

Here at Netlify, we’ve experienced the landslide first hand. More than 2 million developers and businesses have joined our journey, and today 16% of web users will visit a Netlify-powered site or app every month. In addition, the Jamstack is proving itself to truly scale to the largest of use cases of the modern web from companies like Twilio, a company with a market cap of $60B, running their core product, the Twilio Console, as a Jamstack application on Netlify, to a company like Spring using Netlify to build over 6.5 million e-commerce storefronts.

Yet in many ways we’re still just getting started, and the need to avoid falling into walled gardens persists. As a Jamstack community, while we celebrate all of this adoption and success, we need to keep pushing to innovate and mature.

To further drive this innovation over the past few years, Matt and I have made angel investments in the Jamstack ecosystem. The checks were small, and it’s never been about income. We wanted to both pay it forward and help drive the Jamstack movement forward and have created some cherished relationships along the way.

Now we are ready to take the next step! Alongside today’s company funding announcement, we are incredibly excited to be launching the Netlify Jamstack Innovation Fund.

We’re planning to invest $10 million in early stage startups building for the Jamstack ecosystem as well as combining advisory programs to help them build a better business.

About the Funding Program

Once again, we are betting on the web. We want to invest in the next generation of services that will continue to push us forward and create a healthy and vibrant ecosystem. Here are some of the benefits of becoming an early-stage company in the Jamstack Innovation Fund.

It’s a big bet, but we’re doing this because the success of these companies is our success. The Jamstack requires a thriving ecosystem. We win together.

One more thing. Our Commitment to Open Source

It’s no secret that any digital ecosystem traditionally is deeply dependent on open source projects and contributions, and the Jamstack is certainly no exception. Since our inception, we’ve donated free Netlify usage to thousands of the most important open source projects in the world such as React, Vue, Kubernetes, OpenStack, etc. We’ve also invested in sponsorships and contributions to the next generation of frameworks, such as Nuxt, 11ty, Astro, and more.

Continuing those efforts we’re super happy to announce that in addition to investing in the next wave of Jamstack startups, we’re also dedicating $1 million to open source project sponsorships, project promotions and upstream contributions from a dedicated development team.

Let’s Build a Better Web, Together!

It’s been the privilege of a lifetime to be part of the web’s transformation.

Once again, we find ourselves betting on the web by investing in the next generation of services that will continue to push us forward and create a healthy and vibrant ecosystem.

We’re far from done, but I feel incredibly fortunate to stand in a position where we can now start paying it forward, and I’m looking very much forward to making more partners in our joint journey for a better web.

The open source Netlify CMS has hit 1.0, with the release of an editor-friendly UI and general improvements that yield greater stability and usability.

Architecting a blogging platform on the Jamstack with On-demand Builders

What if you wanted to build your own platform for users to generate content? On-demand Builders may be what you're looking for!