Smashing Magazine
on the Jamstack

There was a modern web renaissance taking place and Smashing planned to be a part of it. After learning their site could be 6x faster if they took advantage of a global CDN, Smashing made the decision to choose the Jamstack and partnered with Netlify to get the job done. 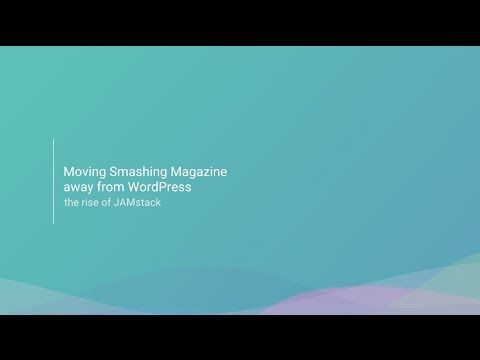 Smashing was using various tools and platforms to manage everything from subscriptions to content which was resulting in frustration over where to go to for what. WordPress was causing major headaches and they were no longer happy with what it had to offer. Even with using most of the caching plugins available, it was clear that WordPress was not working since they had issues with every single caching plugin.

The priorities for Smashing Magazine were..

Access to a unified platform - somewhere to unite the variety of technical tools they utilize to manage their site.

The freedom to build a design they loved without limitations presented to them with WordPress and other tools.

The most performant site possible with a focus on reliability and speed.

We realized very quickly that smashingmagazine.com and the teams specific needs would require many. However, we discovered that nothing existed would give Smashing the ‘unified’ feeling they needed to get to the next level. We decided to take this on ourselves.

…we could have what we always wanted in terms of flexibility, speed, performance, architecture for the front end.

We wanted to deliver every single tool, detail, and functionality that Smashing Magazine desired. However, it was equally important to us that we made our efforts worthwhile for the community at large. This is why we used the Smashing experience to build an eco-system for Jamstack sites that is open source and community driven.

Why the Jamstack? The Jamstack has many core practices that makes it ideal for modern web development. Jamstack sites use the power of a CDN to unlock speed and performance that can’t be beat. It’s all in Git, so it uses no databases to clone and has no complex installs. Since Jamstack markup is prebuilt, it uses automated builds, meaning content changes won’t go live until you run another build..and that’s just a few examples.

You can find a list of our Jamstack supported APIs on our open source page . There’s a whole technical journey behind these decisions and we will be sharing the details of that as well in a future post.

GoTell - an API and build tool for handling large amounts of comments.

GoCommerce - a small Go based API for e-commerce sites that handles orders and payments.

GoJoin - an API that wraps Stripes subscriptions for Single Page Apps and sites.

GoTrue - a small open-source API written in golang that can act as a self-standing API service for handling user registration and authentication for projects. It’s based on OAuth2 and JWT and will handle user signup, authentication and custom user data.

Netlify CMS - a free, open source content management system. Far from it’s bloated, monolithic cousins like WordPress, we wanted to bring Netlify CMS to the modern, Git-centric world by integrating content editors into a Git workflow. In addition, Netlify CMS is platform agnostic and works with (almost) all static site generators and sites stored in Github. It’s fast, easy, flexible, and we are very proud of it.

(We are in the midst of writing a more technical account of the Smashing Project, expect an update soon.)

For me, all I have to do is write HTML, CSS JavaScript and everything works like magic.

SmashingMagazine.com is now much faster, they went from 800 ms time to first load to 80ms. Their users will have a smoother experience due to the easier integrations, speed, and better performance.

Smashing now has the unified platform they desired with the design they dreamed of. They go to one place for the robust needs of their site. With Netlify, our open source projects, and a more efficient way of managing content there’s no longer confusion about which buttons to push or which tool to go to for what.

The Jamstack has proven it is the captain of the modern web renaissance and we believe open source technologies will be the key in moving it even further.

The time to first load is so much faster than before… before we had to wait for the HTML file being served for 800ms and now it’s 80ms.

Use the platform Smashing Magazine trusted to get the Job done.