As websites grew to deliver more and more content, the web development industry found new ways to make the process of maintaining and updating sites more efficient. Years ago, we saw a move away from creating large numbers of individual files by hand, to a system where repeated sections of code could be included and repeated more easily. Web servers would perform that task on demand whenever a request for a resource was received. They’d faithfully combine templates and content, apply loops and logic, and return a page view whenever one was requested. And we’d have to ensure that they had enough horsepower to keep up with demand, fearing the times that our site became popular!

This has a number of valuable effects, but most important is that it shifts this work away from “request time” (when users ask for the view) to “build time” which is unrelated to when users ask for the view of a page. This “decoupled” architecture breaks the relationship between the number of visits to a site and the overhead of generating the views to service all of those visits. 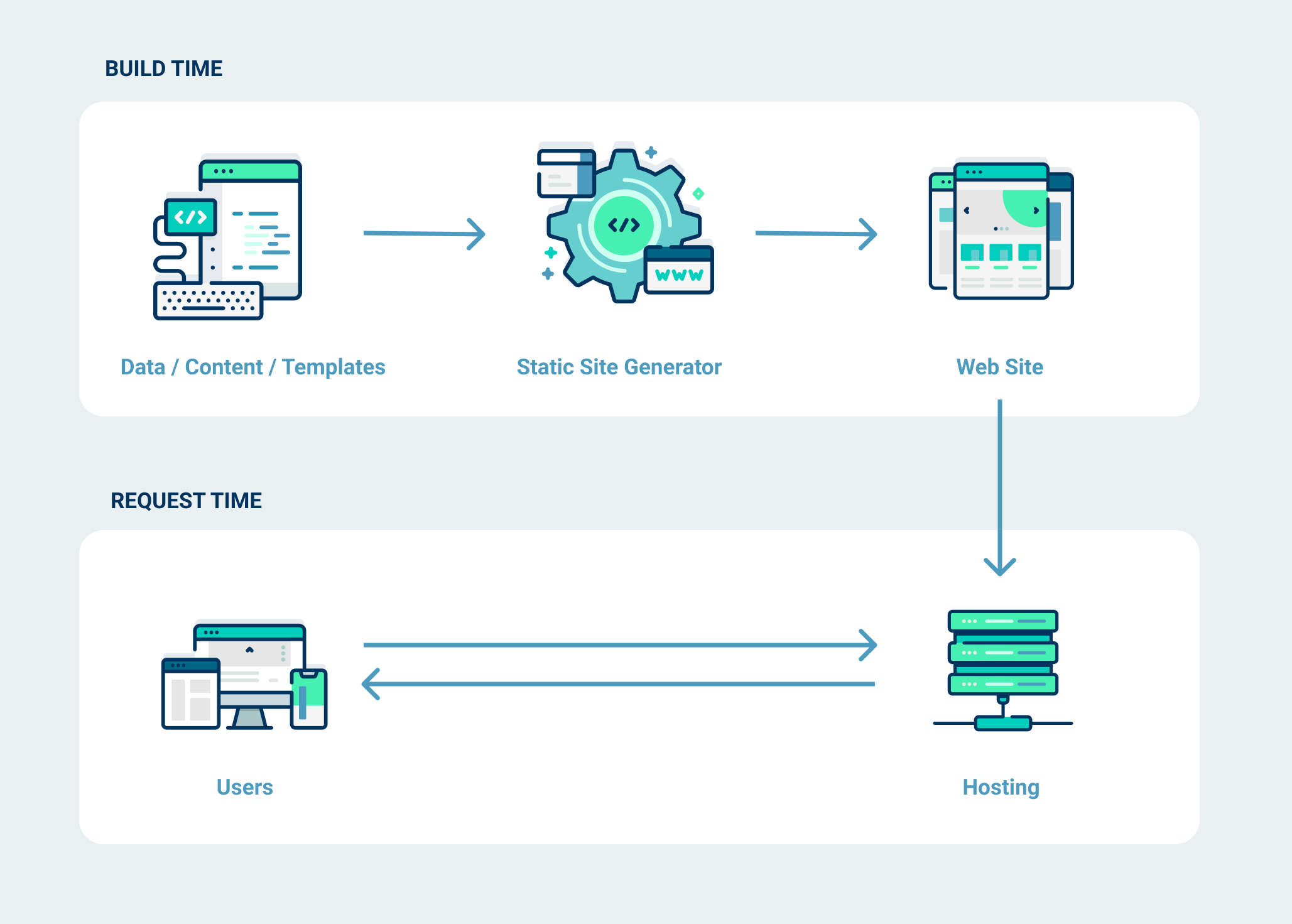 This might sound like a return to “the old ways” of making sites, but there are some key differences:

Let’s talk about those a little.

And when we don’t need to access databases, perform logical operations, or modify resources for every view, we can drastically simplify our hosting infrastructure. This also further improves security as there are physically fewer servers involved handling out requests.

The beauty of a site which has already been generated, is that each page is ready to serve without additional server work for each request. We don’t need to add more computing power to handle spikes in traffic because we’re not compiling a response for each request on demand. We did the work earlier. We were able to ensure that everything was correct, as part of our automated build process, and now we simply give the users what they asked for.

When we make our sites with a static site generator, visitors don’t need to interact with any of the machinery involved in generating each view at all! We can deliver the result of all that prior work directly from a distributed network of caches (a CDN), making the distance that the requests travel short, and totally avoiding interacting with any of the systems.

We could go deeper into these and other benefits, but I’d recommend taking a look at our Jamstack page for more information. Or if you’re interested in following along with a presentation on this, you could watch this introduction to Jamstack video.

There are a number of key considerations when looking for the best static site generator for you and your next project. Let’s look at 3 of the most important ones.

What languages and frameworks suit your development team? There are SSGs build using anything from Ada to Vue. (I’m sorry, I couldn’t find any based on languages beginning with the letters W-Z. If you know of one, perhaps you’d add it to StaticGen and let me know!)

If your team specializes in .net, they can still work with static generators and benefit from the advantages described above without moving from their familiar development ecosystem. They don’t need to learn a whole new language.

The type of variety and complexity in the site you are creating could well influence the templating tools you’ll want at your disposal.

Frameworks such as Vue and React afford used component models which logically capture not just visual style and content, but also behaviour and functionality. So if your project is more of an application than a site (a “doing” site than a “viewing” site), then perhaps choosing an SSG based on one of those frameworks would be advantageous.

"Modern Web Development on the JAMstack" by Matt Biilmann and Phil Hawksworth, published by O’Reilly and available to order or download.