Today we are delighted to release the results of the 2021 Jamstack Community Survey. In this blog post we’ll be covering some of the top-level findings; you can hear more at my talk at Jamstack Conf later today and dive deeper into the results on Jamstack.org. With over 7,000 respondents this year, more than twice as many as our previous year’s survey, there’s a lot of great data to cover. Look out for follow-up posts in the coming months diving deeper into specific aspects of the data.

Jamstack has become the way students learn to deploy

We looked at a variety of demographic data about the community: job titles, employment status, where in the world you live, what industry you work in. There were a bunch of surprises but the biggest was that the percentage of students in the community has more than doubled. We believe from the survey and Netlify’s own internal usage data that part of the explanation is that programs that teach web development are increasingly recommending the Jamstack, and Netlify specifically, as an easy place to get started with web development.

The pandemic has massively accelerated the shift to remote development

It’s no surprise that the pandemic has changed things for everyone, everywhere, and that includes the working lives of web developers. We found that in the initial disruption of 2020, less experienced developers (less than 2 years of experience) were more likely to lose their jobs; more than 10% said they did. Developers with more than 2 years of experience saw a different effect: their jobs went remote, and an astonishing 40% of them say their jobs will stay remote even when the pandemic is over. We are just beginning to see what the long-term effects of such a huge change in working life will be, and we’ll be digging further into pandemic effects in a later blog post.

More developers are building fully dynamic apps on the Jamstack

We ask developers what kinds of sites they build: single-page apps, fully static sites, hybrids, or fully dynamic sites. While there was no change from 2020 to 2021 in the proportion of these types of apps, the percentage of developers who say they build fully dynamic apps on the Jamstack specifically, rather than some other architecture, rose from 57% to 65%. We believe this is a sign of the increasing power and capability of Jamstack as an architecture, and it ties in to the greater use of serverless functions (see below).

Security is a rising priority

Do developers prioritize speed of development, site performance, security, uptime or other factors? We asked this question both years, and performance and uptime were the top two categories both years. In 2021, however, the new third place went to security, a significant shift in a data set as large as this, and indicative of a maturing community and the Jamstack’s enviable reputation for security.

We found that 32% of Jamstack developers are building websites that have audiences numbered in the millions. This is a strong vote for the scalability of the Jamstack architecture, so we dug deeper into that data on the developers who build these extremely popular sites. We found they have different development priorities, including a greater focus on legal compliance, as well as different technical priorities, such as a greater emphasis on the importance of mobile devices as a target.

Our data on the technical choices made by developers is some of the richest we collect, so we’re going to be diving into that separately in several following blog posts. As a quick preview, however, here’s our map of major web frameworks by their usage and the reported satisfaction of users of that framework: 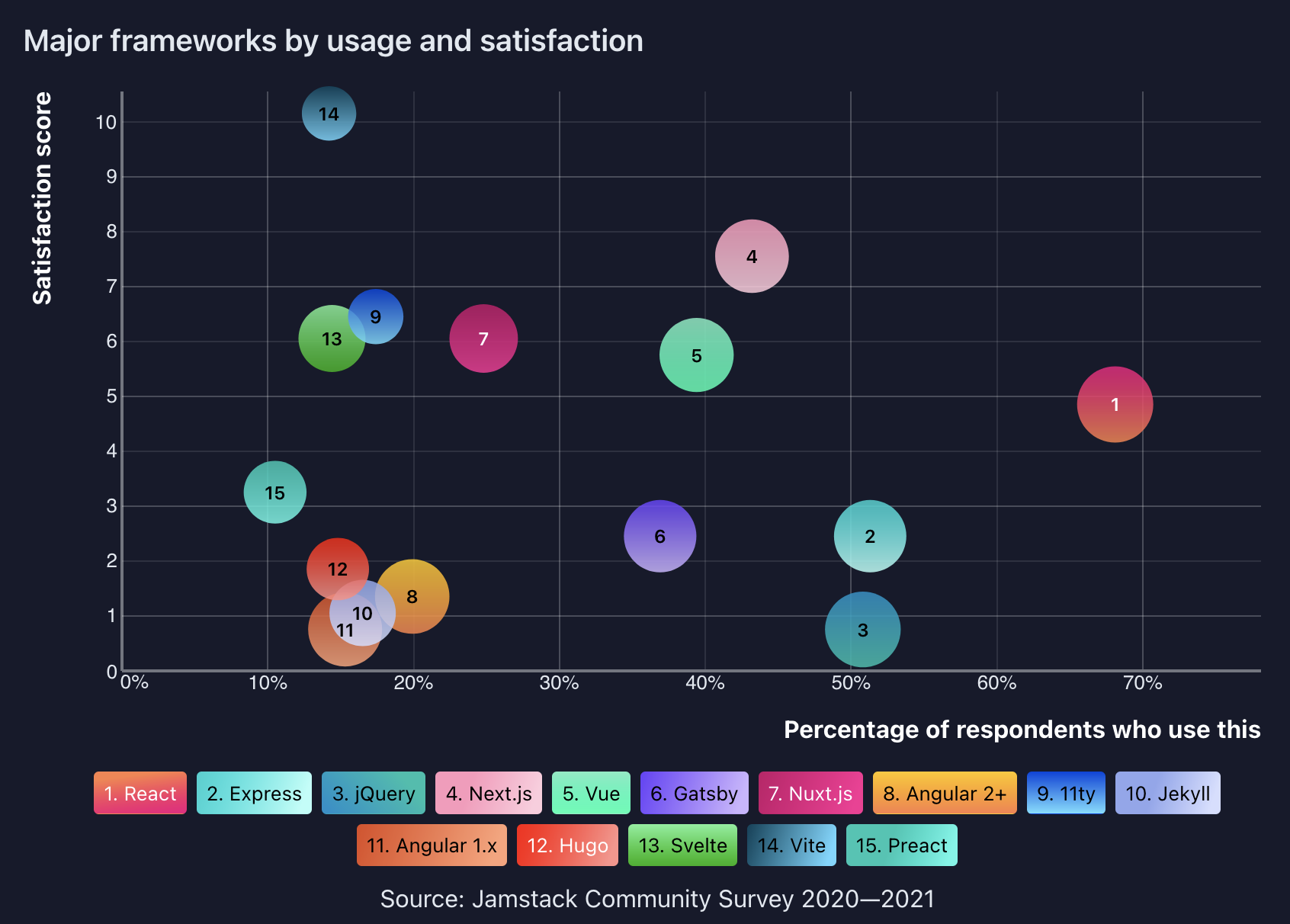 You can see the huge popularity of React continues unabated, and Next.js has some of the happiest users of any major web framework! We have another 16 minor web frameworks as well as year-over-year changes to talk about though, so look forward to our follow-up post where we’ll go in-depth.

Some of our other headline findings on the technical side were:

The overall picture of the Jamstack community in 2021 is one undergoing rapid, healthy growth, absorbing a stream of brand new developers while taking increasingly mature approaches to security and other industry challenges. Stay tuned for our deep dives into this rich data set over the coming months.

We also want to extend our thank-you and gratitude to the Jamstack community members for helping us to get more than 7,000 respondents to join us in the survey. A special shoutout to AgilityCMS, Algolia, Bejamas, BigCommerce, CSS Tricks, DXP Report, Jamstack Meetup organizers like NYC, OPO, and Toronto, Jamstack Radio, Jamstacked newsletter, Marzee Labs, Netlify team, npm, Prismic, Reach Digitalworks, ScreamingBox, Smashing Magazine, Stack Overflow, Strapi, TakeShape, The New Dynamic and others in the community that individually shared the survey in your networks. We could not have gotten this level of participation without you!