Netlify has spent a great amount of time integrating Static Application Security Testing (SAST) tooling in CI pipelines over the last couple of years, we’ve noticed that even the greatest SAST tools often fail in practice. Before deciding on GitHub Advanced Security, we evaluated and tried many different types of tools. After careful evaluation we decided to use GitHub Advanced Security, using a somewhat unique approach, and we would like to share our experiences with you.

The Challenges of SAST (And Why We Chose GitHub Advance Security)

In order to achieve the desired post-scan functionality, before we started using GitHub Advanced Security, we were mostly wrapping open source tools with script languages to add what we felt was necessary. These wrapped OSS tools look something like ‣ or ‣. But Netlify’s developers didn’t want the need for additional configuration files to manage security scan functionality like suppressions, issue creation and Slack alerting. Also, with this approach, our Security Engineering team would fall behind in the maintenance of these wrapped tools. So we began our search for a comprehensive tool that was already in existence on the market.

First and foremost, everyone knows we need security tools that locate quality findings. But looking beyond quality of findings, the main challenge for Security Engineers focusing on SAST is getting the vulnerability notification in front of developers in a way that is worthwhile and actionable. This is extremely challenging for a variety of reasons, each of which have their own caveats that must be understood. Here are what we consider to be the most pressing challenges: 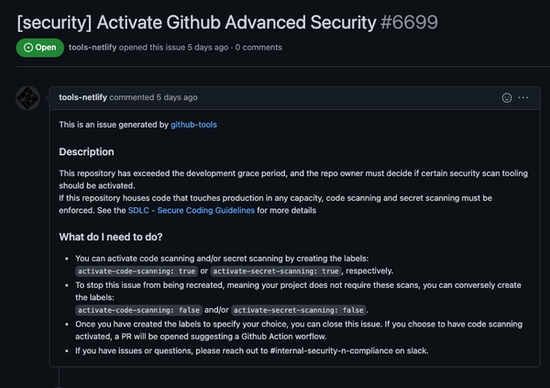 Notice that the actual implementation of the security tools is controlled through labels, which anyone with the ability to create labels can use to apply. When the labels are set to false, the action merely stop the issue from being recreated.

Both presenting GitHub Advanced Security as an issue to developers, and enabling their control of activation with labels have huge advantages:

Netlify’s Security team is then able to perform continuous monitoring of the overall implementation metrics at enterprise and organization levels, to understand the overall security posture of the organization, and gauge the level of implementation of dependency checking, code scanning, and secret scanning across our GitHub organizations and repositories. Having this enterprise-wide observability enables us to emphasize trends to our Risk Management Committee for comprehensive security awareness by leaders and staff across the company.

There are definitely some larger challenges to implementing these types of SAST tools that are important, but solutions are generally not available in open-source or commercial tooling. Our opinion is that this is due to a disconnect between the people using the tools, and the people creating them. Here are some of the major challenges that never really seem to be solved well.

Netlify uses GitHub Advanced Security to discover dependency, code, and exposed secret vulnerabilities early in the Software Development Lifecycle. GitHub has a comprehensive UI that reduces context switching and toil for developers tasked with remediation of these vulnerabilities. Netlify’s security minded customers who host their source code in Github can help assure the security of their sites, workloads, and apps that run on Netlify by utilizing GitHub Advanced Security.s

Want to help build a better web? Netlify is hiring!

Want to help build a better web? Netlify is hiring!